Chinese Roast Chicken with 5 Spice Which My Dad Disapproved 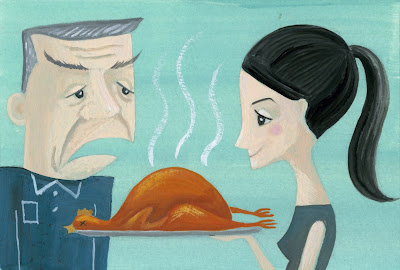 My friend told me after she and her boyfriend broke up, she went back and cried on her dad's shoulder. I was shocked. You can do that?! It is like a colour that I cannot even imagine. My dad made a surprise visit to San Francisco a couple months ago. Partly it is because of the Chinese culture, the fathers tend to be very serious and distanced, and they believe in tough love. I remember when I was a kid, I asked my dad, "Dad, how come you never compliment us on anything?" He said, "Whenever I'm not saying anything, that's a compliment."

I guess that is part of the reason why I'm so distanced from him. Because that gives me the illusion that he is not saying anything, and it is a compliment. When he arrived at my apartment building, he insisted on carrying his luggage. I grabbed the luggage from his hands and started walking up the stairs. After we reached the top floor where my apartment is located, I realized he was breathing heavily. I think as daughters, we always forget our parents have aged. And they forget we are grown ups. His eye brows are growing so long and curling up. He is quite proud of them actually. He was also proud of my car's powerful rumble. He didn't say anything about it, but he took out his new digital camera, and asked me to stand beside my car.

During his stay, I made Chinese roast chicken with 5 spice for him. While I was busy in the kitchen, he was reading Chinese newspaper, word by word, silently. When we had dinner, he was commenting on everything. Why didn't you put more salt on the chicken? Roast chickens in China tastes so much better than this. Why didn't you put some bouillon powder in the vegetable stir fry... When I was doing the dishes, I thought of how stupid I was to cook him a Chinese meal and give him one more chance to criticize me. I even spent $14 to buy a top quality free range organic chicken from Berkeley Bowl and then stood in line to pay for that damn chicken....my misery.

While I was driving him around the city, there were tons of posters for the movie I worked on, in the bus stations, and on billboards everywhere. I was one of the tailors for this movie, which I am proud of. I got to see some of my work on a big screen. But I didn't bother to point that out to him. I guess all our lives, we try so hard to get our parents' approval, ranging from roasting a chicken to having a career. I can cook a fantastic 9 course French dinner and I work in a reputable computer animation company, but it might not mean anything to him after all.

After I drove him to the airport, I came home and felt such a relief that my life was back to normal. When I walked into my bedroom, on the drawer chest, there was a picture of me standing beside my car with an awkward facial expression. I don't know when my dad got that printed out. Next to the picture there were a little webcam, a package of bootleg Chinese typesetting software, and a writing tablet. Unfortunately, none of them are compatible with my laptop, which I think he didn't quite understand. It is the thought that counts. Well, I don't know Chinese typesetting, and he doesn't read in English. But there is always a beginning on everything. Perhaps he didn't hate my Chinese roast chicken with 5 spice that much after all.

Preheat oven 450 degree
rub chicken with vegetable, 5 spice, and sprinkle salt and pepper. I like to rain a thin layer of salt evenly over the skin. It will give you a result of a crispy salty skin. Sprinkle some in the cavity, too. Put the ginger slices and green onion in the cavity. Tie legs with strings.

Put chicken in a roasting pan, breast side up. Stick a meat thermometer at the thigh of the chicken. Bake chicken for 20 minutes. Then turn the heat to 375 degree, and make for another 30 mins to 40 mins, depending on the size of the chicken, or until the internal temperature reaches 180 degree. Discard ginger and green onion in the cavity. Let chicken rest for 15 minutes before you serve.
Posted by Carmen at 11:58 PM